Success Story of a WKW Beneficiary

My name is Cynthia Jomo, I am one of the beneficiaries of WKW. I joined WKW back in the year 2007 when I was in class seven. At the time the organization was headed by Br Frank. I was still a little girl, I lived with my parents in a single room with my four siblings in Kibera. Back then we could not afford three meals, I had a torn uniform and my shoes were so worn out. WKW took me in as their own and clothed me, they supported me all the way from class seven until I finished my primary school and I managed to score 311 marks out of 500, where after I was called to join Ulanda high school .My parents would have not been able to support me in the same, thanks to WKW which had sponsored me. They paid my school fees in full and bought me uniforms and all the necessary requirements I needed for my high school. That was in 2009, not a single day was I ever chased out of class due to school fees. This went on until I managed to score a mean grade of B.

After my results, I had to look for a suitable career to pursue and this made me stay at home for the whole of 2013. I could not join Egerton University where I had been called to pursue sociology because I did not like that course. In January 2014, I went back on a mission to look for a school, I tried KMTC but I was not successful, then God was so faithful to me when I got a call from WKW looking for me, when I went, I narrated my story to them that I wanted to pursue a nursing course which I have not succeeded in applying. Sister Leonida offered me a helping hand. I volunteered as a receptionist as I looked for a college to pursue my career. While helping at the Centre Sr. Leonida brought me a brochure of Nairobi Hospital School of nursing. I applied for a three-year diploma in nursing. I was called for an interview which I passed well and secured a vacancy. I was so happy to finally join college in September 2014.The organization paid all my school fees and all the stuff that I required. This included my uniforms, books, accommodation at school, food and even the toiletries that I required.

Things took a turn for the worse again in 2016, my school fees were increased by over 100,000, the accommodation and meals fees were also increased by 100,000. This confused me more and I did not know what to do. I decided to face the director with my situation and explained to her about the school fees increment. I thank God because WKW paid my tuition fee even with the increment. In September 2017, I finished my nursing training. I came back at WKW to volunteer as a receptionist as I waited for my results. In December, the results were out, and I was glad to have passed my exams with a credit. I was called for a job interview the same month which I passed and secured a job. I started working in January 2018 at the Nairobi Hospital. I am a proud registered nurse working in a male surgical department. After getting my first salary I had to move my parents out of Kibera, we moved to a bigger house at Jamhuri which is big and can accommodate all eight of us as a family. I am now able to support my parents, to buy them basic needs like food and clothing. I am very much indebted to the entire WKW for always being there for me and giving me a home when I had nowhere to call home. I often visit the Centre to talk to the students to give them advice and to give motivation that nothing is impossible. I am working hard so that I can pursue a degree in nursing next year or do critical care nursing at the Nairobi Hospital. Once again God bless you WKW 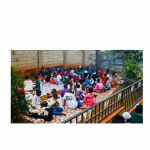 $13,500 Raised In Our Christmas Appeal So Far!News