Rains Both A Blessing And A Curse To Kibera Residents

The heavy rains had been welcomed by many after the prolonged drought that affected more than three million Kenyans. While the arrival of the eagerly awaited rainfall is considered a blessing and brings great relief to agricultural areas, rains both a blessing and a curse to Kibera Residents. In Kibera – the biggest informal settlement in Kenya, a sea of rusted tin roofs, earthen walls and dark narrow paths – the rain is responsible for leaving a mark of destruction and losses to over one million people who live in this one square mile settlement. The river cutting along the settlement washes away houses, the water leaks through the corrugated rooftops, and disease spreads quickly. While the entire settlement struggles to cope, women and children living in Kibera bear the worst of the rain’s aftermath.

Recently, a mother and her two children were reportedly swept away by raging floods that rocked Kibera after the heavy rains. The bodies of the three were later recovered. They were in their house next to the river but it seems the heavy floods swept away their residents before they succumbed to their deaths.

Several families were left homeless after the heavy rains destroyed their houses and properties. Our beneficiaries; children and women were not spared either. Ester Bochere is one of the parents that were affected. 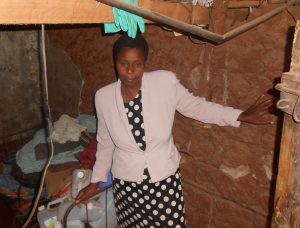 ‘It was on a Tuesday evening like any other day, we were blessed with rain. The rain shower was very heavy and it rained for a long time which lead to the breakage of my house walls. It almost took down my house. The rain water got its way into my house causing damages to my house holdings. We were forced to stand outside with my children as we watched it helplessly carrying away our utensils, shoes, Jiko and even our mattresses. Water from the broken drainage system caused a bad smell in my house that no one could stay in the house even when the rain stopped. The place we used to call a home is no more. I have to bear another cost of trying to put up a wall so that we can get a place to lay our heads. I was happy that the long drought had ended but the damage caused by the rain made me regret why the rain had to come. However I am grateful that my family is safe even though our house has been damaged because I know of families that were swept away by the rain. I also am grateful to Wanawake Kwa Wanawake Kenya for their constant support and for taking my children to school away from Kibera. It would have been really hurting and hard to sleep in the cold with my children here in Kibera as we look for another house. Thank you Wanawake Kwa Wanawake.’ 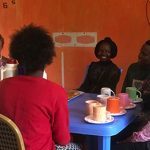